Asha Bhosle was born on September 8, 1933, to Deenanath Mangeshkar and Shevanti in Sangli, Maharashtra. She is an Indian playback singer, best known for her playback singing in Hindi cinema. Due to her father’s death, she started working at the age of 9 to make her ends meet.

Asha crooned her first film song ‘”Chala Chala Nav Bala” for the Marathi film Majha Bal (1943). She made her Hindi film debut with the song “Saawan Aaya” for Hansraj Behl’s Chunariya (1948). Film Raat Ki Raani (1949) marked her first solo Hindi film song. She rose to fame with the song Nanhe Munne Bachche from the film Boot Polish in 1954. She got her major breakthrough in 1957 for the movie Naya Daur, where she sang for all the female lead’s songs.  She wanted to change her stereotyped image which was created by her cabaret songs like Piya Tu Ab To Aaja and Yeh Mera Dil. She then attempted to sing Ghazals in 1981 like “Dil Cheez Kya Hai”, “In Aankhon Ki Masti Ke”, “Yeh Kya Jagah Hai Doston” and “Justaju Jiski Thi”, which surprisingly earned her great acclaims. During the 2000s, she sang chartbusters, including “Radha Kaise Na Jale” from Lagaan (2001), “Kambakht Ishq” from Pyaar Tune Kya Kiya (2001), “Yeh Lamha” from Filhaal (2002), “Lucky Lips” from Lucky (2005) and many others. Asha and her sister Lata have also sung together including “Man Bhawan Ke Ghar aye” (Chori Chori, 1956), “Unse Nazrein Mili” (Gazal, 1964), “Jabse Laagi Toose Najariya” (Shikar, 1968), “Man kyun behka” (Utsav, 1984) to name a few. In 2011, she entered the Guinness Book of World Records as the most recorded artist in music history. She was honoured with the Dadasaheb Phalke Award in 2000 and the Padma Vibhushan in 2008. She has won seven Filmfare Best Female Playback Awards, but she requested to not consider her name for the nominations in future.

At the age of 16, Asha eloped and married 31 year old Ganpatrao Bhosle against her family’s wishes. They had three children. She had a troublesome marriage which ended in a divorce.  In 1980, she married Bollywood music director R.D. Burman. They had a daughter Varsha, who committed suicide in 2012. 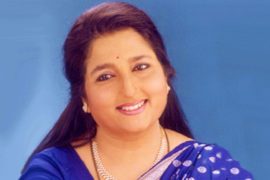